Creative Resurfacing has been providing the best concrete services to the greater Buffalo area for years. We continue to serve as the premier concrete solutions provider because we focus on the quality of our work and our relationships with customers. Our focus is delivering the best possible finished product and an unequaled customer experience. We are the concrete experts and we will gladly be there to answer any questions you have along the way. 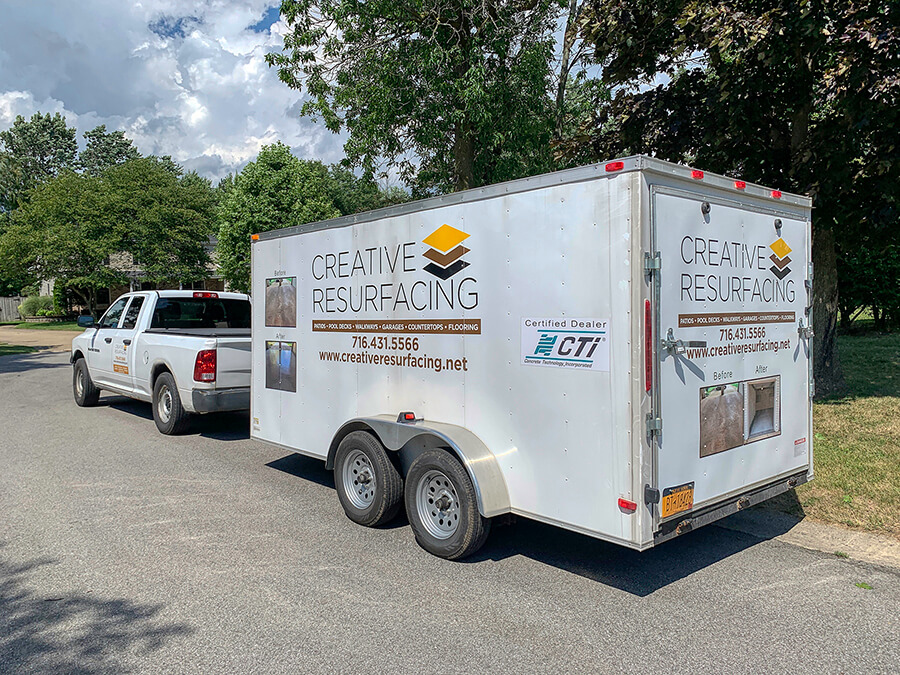 CTI started providing their coatings in 1991 CTI’s business philosophy has always been to provide the highest quality coatings available, coupled with in-depth initial training and ongoing support. To distribute their products and provide service to the public, CTI looked for qualified people across the country who wanted to establish their own small businesses to start representing the CTI product line. CTI found an overwhelming acceptance of its products and the business began with a jump start, exploding onto the scene in its early years. By the end of 1996, CTI had blossomed to over 200 Dealers nationwide with representation in 10 countries. In 1997, with over 400 Dealers across the United States and representation in a number of foreign countries, CTI was honored by INC Magazine with its “INC 500” designation, as one of America’s fastest growing, privately held companies.

• CTI provides one of the most beautiful, versatile, and fastest growing products on the market today.
• Founded in 1991, CTI has seen over 900% growth since opening its doors in the Tampa Bay area in Florida.
• CTI has been featured in the INC 500 list of the fastest growing, privately held companies in the U.S. today.
• CTI has been listed in the Maddux report’s Fast 50 and Deloitte and Touche’s Technology 500.
• CTI has a Dealership network located throughout the United States as well as in 22 foreign countries and is comprised of the most successful business people in the U.S. today.
• CTI’s success has come from educating high quality business people on the intricacies of starting a small business in the multi-billion dollar industry of concrete restoration and beautification. CTI then supports these Dealers with 24 hour a day technical support, a proven marketing plan, and ongoing training.